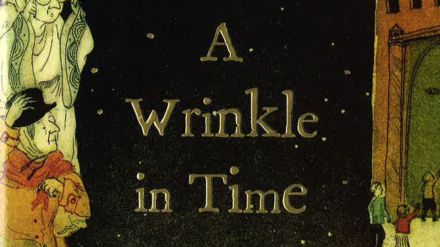 13 year old Meg Murry is a bit out of sorts with her life, misunderstood by teachers and classmates and not as gifted as her athletic twin brothers Sandy and Dennys. Her father, a brilliant physicist, has disappeared a year earlier without a trace, leaving her beautiful and clever scientist mother and happy family with unresolved grief and questions.

Meg’s five year old brother Charles Wallace, a child prodigy, is her only kindred spirit and companion amid all the confusion of her teen existence.

One dark and stormy night, Meg, Charles Wallace and their mother, are visited by their curious neighbour Mrs Whatsit. The eccentric old tramp mysteriously mentions,

there is such a thing as a tesseract…

…nearly making Mrs Murry faint. She reveals that it was their father’s life mission to discover the tesseract and he was close to making a breakthrough when he mysteriously disappeared. The revelation launches Meg and Charles Wallace on an adventure to find their father.

With the help of Meg’s high school friend Calvin, they track Mrs Whatsit to her ramshackle house in the woods where they discover her two equally mysterious and eccentric friends, Mrs Who and Mrs Which. These women transport the three children through a tesseract, a fifth dimension fold in the fabric of space-time, to the planet Camazotz where Meg’s father is held captive by “The Black Thing”.

Meg, Calvin and Charles Wallace discover the universe is threatened by “IT”, an evil presence which already partially has a grip on planet earth. “The Black Thing” or “IT” controls minds and enslaves all living beings, removing all freedom, joy, creativity and love.

Charles Wallace seeks to counter “IT” with his intellect but succumbs to its mind-controlling powers. It is only Meg who discovers that she is in possession of the one thing “IT” does not have – love.

The novel is a classic in teen and young adult fiction, placing the cosmic battle of good and evil into the hands of children. Meg realises that parents cannot always solve things, and sometimes kids can solve problems themselves.

Originally despondent she did not have the genius intellect of Charles Wallace or the athletic good nature of her brothers, Meg realises she is in possession of the most powerful force in the universe to counteract evil – love.