In Saigon of course stories of war come to mind.

One thinks of the musical ‘Miss Saigon’ and miserable war biopics such as ‘Good Morning Vietnam’, ‘Full Metal Jacket’ and the Coppola classic, ‘Apocalypse Now.’ 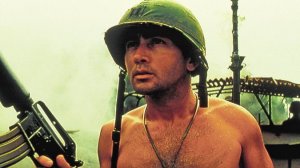 My tour guide fought in the war and took our bus via the obligatory Centre for Victims of War. His presentation of life for Viet Cong surviving in tunnels while U.S. Bombers swept napalm and Agent Orange through fields and jungles, was sobering.

Many soldiers lived 12 years under ground, if not killed blinded by the eternity of hiding. Children of descendants of the war still suffer deformities from chemical weapons.

While much propaganda of the time focused on the evils of communism – Coppolas film ‘Apocalypse Now’ is more self exploratory.

Using Joseph Conrad’s modernist classic ‘the Heart of Darkness’ as inspiration, Coppola points out the hubris of American imperialist intentions.

The ‘heart’ of darkness is not the savage land explored by intrepid men, nor the corruption they seek to wipe out,  but in fact the ‘heart of man’ exposed there once up-river as far as can go.

There most keenly this madness is epitomised by Kurtz – a soldier, seeking worship from the locals and decorated with the skulls of his conquests.

Instead of bringing ‘justice’ through righteous war as governments would have us believe, the narrative explores the darkness at the seat of the human soul-  a darkness war does not create, but sanctions.

Kurtz’s final words before dying articulate the tragedy, “the horror, the horror.”