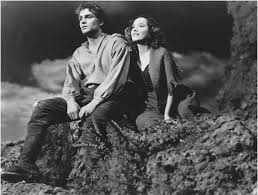 This post is dedicated to Tamlyn, whose birthday it is today !!

Wuthering Heights by Emily Bronte is considered to be a classic of English literature. Written in 1846, it was published in 1847 when Bronte was 29 years of age. It was her only novel and her premature death meant she never knew of the popularity and fame the work would bring her.

The novel is characterised by its dark gothic tones and was met with mixed reviews because of its depiction of mental and physical cruelty. It challenged strict Victorian ideals of the day, featuring religious hypocrisy, immorality, class and gender inequality.

But its enduring popularity demonstrates that it is the depth of love between the two protagonists, Cathy and Heathcliff, both profound and tragic that resonates with its readers. 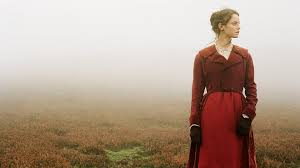 Heathcliff and Cathy’s love story is caught up in a complex web of class struggles and human vice. Heathcliff is abominably treated by his adoptive brother Hindley and later, crushed by Cathy’s rejection of him, to marry the more genteel Edgar. Cathy describes the choice before her:

It would degrade me to marry Heathcliff now; so he shall never know how I love him: and that, not because he’s handsome, Nelly, but because he’s more myself than I am. Whatever our souls are made of, his and mine are the same; and Linton’s is as different as a moonbeam from lightning, or frost from fire.

Foolishly she believes she can use her marriage to better Heathcliff’s position in life and have him close. In fact, he departs and returns a wealthy man but remains tormented even after her early death.

Heathcliff is Byronesque, the archetype of the tortured romantic hero whose all-consuming passions destroy both him and those around him.

Lord Byron writing 30 years before Bronte, described his hero in The Corsair [1814]:

That man of loneliness and mystery,
Scarce seen to smile, and seldom heard to sigh— (I, VIII)

He knew himself a villain—but he deem’d
The rest no better than the thing he seem’d;
And scorn’d the best as hypocrites who hid
Those deeds the bolder spirit plainly did.
He knew himself detested, but he knew
The hearts that loath’d him, crouch’d and dreaded too.
Lone, wild, and strange, he stood alike exempt
From all affection and from all contempt: (I, XI)

Doubtless, Bronte was influenced by such a character.

Interestingly, Emily herself was described by her Belgian teacher, Constantin Heger in heroic terms:

She should have been a man – a great navigator. Her powerful reason would have deduced new spheres of discovery from the knowledge of the old; and her strong imperious will would never have been daunted by opposition or difficulty, never have given way but with life. She had a head for logic, and a capability of argument unusual in a man and rarer indeed in a woman… impairing this gift was her stubborn tenacity of will which rendered her obtuse to all reasoning where her own wishes, or her own sense of right, was concerned.

So Emily Bronte wrote a novel of a man, Heathcliff who is Byronesque in character; perhaps she wrote of herself, wild and free yet trapped by the world she inhabited? Or is it Cathy and the choices she faces that Emily presents as though her own?

Cathy’s choice has terrible consequences. The violence visited on Heathcliff by Hindley and others did not come close to the cruelty of Cathy’s actions.

When Heathcliff finds her dying in childbirth, he sobs:

You teach me now how cruel you’ve been — cruel and false! Why did you despise me? Why did you betray your own heart, Cathy? I have not one word of comfort. You deserve this. You have killed yourself. Yes, you may kiss me, and cry; and wring out my kisses and tears: they’ll blight you — they’ll damn you. You loved me — then what right had you to leave me? What right — answer me — for the poor fancy you felt for

Linton? Because misery, and degradation, and death, and nothing God or Satan could inflict would have parted us, you, of your own will, did it. I have not broken your heart — you have broken it; and in breaking it, you have broken mine. So much the worse for me, that I am strong. Do I want to live? What kind of living will it be when you——oh, God! would you like to live with your soul in the grave?

The novel is a figure of 8, completing one circle when, before Cathy dies, she is reunited briefly with Heathcliff. The second loop does not fully close until their children are fully grown and Heathcliff himself dies, finally reconciling him to Cathy in the graveyard.

The novel is a tragedy in all regards, except that shepherds report the ghosts of Cathy and Heathcliff haunt the moors. True love, thwarted by social class, race, hypocritical choices and hubris –  only finds peace beyond death.

The choice Cathy made is not unlike the primal choice of humans to their maker. Their decision to take knowledge of “good and evil” was perhaps thought at first to better themselves and still maintain a relationship with God. But instead they perished.

And God, when they lie dying – sobs:

While Heathcliff is left cruelly to live on alone, the other story tells of the lover that followed us into death, and restores relationship with us beyond death.