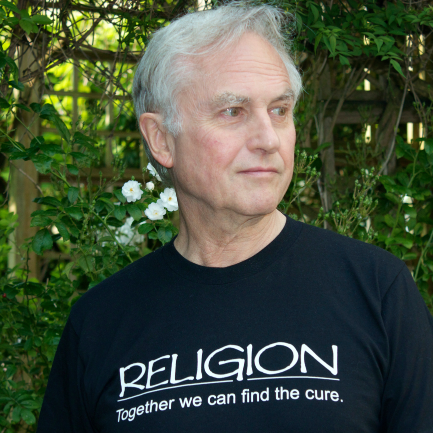 Damien Shalley is someone who randomly came across Bear Skin, several pages deep in google search listings and subsequently submitted feedback.  Considering we gain hits from all around the globe, and a following which interestingly comes largely from North America, it was a surprise to find out he lived in the same city as me in a corner of the anitipodes. Since then he has submitted various guest posts to Bear Skin on various themes of interest – art, music and even creative originals. His latest piece is a reflection on everyone’s friend, Richard Dawkins.

And there he is again, right on schedule, evolutionary biologist and social commentator Richard Dawkins. Perhaps best known for his “evangelical atheism” and his very public position that any form of religious belief is patently absurd, Dawkins loves to express his point of view during traditional Christian religious holidays such as Christmas. One seemingly cannot turn on a television during the festive season without being subjected to his anti-deist opinions. His annual analysis of why belief in God is foolhardy turned up as pre-Christmas viewing on both the BBC and the ABC in 2015, and his previous four-part analysis of why religious faith is antithetical to scientific endeavour also got a repeat airing. (He saves his strongest criticism for the Catholics in the final instalment, in case you hadn’t already guessed). Strangely enough he also resorted to spreading his views via Al Jazeera television last year. (Al Jazeera is funded by the Islamic government of Qatar). Make of this what you will.

Professionally, Dawkins is an esteemed evolutionary biologist with a knack for clearly and accurately explaining biological and evolutionary processes.   For this, he has my admiration. He may well be peerless in his capacity to disseminate this knowledge in an understandable way. I have often marvelled at how well he describes processes such as natural selection, the driver of evolution, and felt awed by his dedication to the advancement of human knowledge.

But Dawkins insists that anyone who adheres to a religious faith or spiritual beliefs of any kind – his most famous target being Christianity – is deluded and foolish. In his publicly-stated view, religious belief is not worthy of serious consideration. His primary argument against it is simple – it is unscientific.   God cannot be observed directly and “belief” cannot be quantified or measured. As such, religious belief systems defy the kind of objective analysis that a scientist like Dawkins requires and must be rejected outright. Yet one only has to scratch the surface of Dawkins’ primary argument to reveal a universe of questions for which he has no answer.

Dawkins himself is a polite and erudite man in his mid-seventies. He is impeccably well-qualified and any attempts to question the scientific basis of his arguments are quickly and skilfully shut down during debates. His primary weakness, it seems, is his intolerance of alternative points of view. In his opinion, God is a delusion, Christians are fools and forms of belief that he does not understand are equally foolish.

Dawkins is an adherent of rationalism and empirical analysis. He espouses a well-known and scientifically well-accepted view that our universe came into existence after a massive cosmic detonation. This explosion spread atoms from an infinitely dense ball of matter approximately the size of a melon to the farthest reaches of space. Elements created in this “big bang” formed the building blocks of organic life. Carbon-based life forms were created on earth when water, amino acids (proteins) and electricity combined to kick-start primordial existence. Human life subsequently came into being after billions of years of evolution.

This is fine as far as it goes. It is a scientifically sound premise and there is a significant amount of evidence to support aspects of this theory. We live in an expanding universe (consistent with an explosive genesis), we are carbon-based life forms, we can observe primitive aerobic organisms living in hot springs in parts of the world today that might well be our primitive precursors, and we can see evidence of evolution in the form of prehistoric fossils and observe natural selection processes in wild environments. The Dawkins position looks pretty strong. And yet, it isn’t.

Can matter originate from nothing? Can nothingness ever be the originator of “somethingness” (for want of a better word?) If our universe began when a massive accumulation of cosmic energy caused a concentrated ball of matter to explode, what was this cosmic energy and where did this ball of matter come from? Cosmologists have recently posited that in space, matter might accumulate in concentrated forms due to inversions wherein space folds in on itself in a cyclical manner. (This has been described as similar to the way in which warm air and low pressure systems create cyclones). This is another scientifically sound theory. But what is this matter which is accumulating? What is this “essence” of the universe – this foundation of creation, so to speak – and where did it come from? And why is the vociferous Richard Dawkins so strangely silent about this topic? Put simply, why can’t Richard Dawkins explain this in the same way that he so easily explains the known and understandable aspects of biology?

Dawkins has been at pains in the past to inform us that scientists cannot seek to explain phenomena starting from a “supernatural” standpoint. A premise such as the creation of matter by God bears no “internal consistency” to a scientist seeking a rational explanation. He cannot countenance this theological option, and within the boundaries of his scientific analysis, he doesn’t have to. But that still leaves a major hole in his analysis, as well as his conclusions about those who choose to seek additional answers elsewhere.

The fact that television programmers choose to allow Dawkins to stick his head above the parapet during the holiday season is probably more a function of their search for an audience than anything else. (He regularly attracts both supporters and critics and they all watch his shows – including me). In his latest outing, Dawkins interviews cloistered monks, an American Catholic priest and comedian Ricky Gervais, as well as looking to astronomy and classic English literature to help explain his position. He concludes after 50 minutes that there is no God and that belief in a deity is facile, that we are an accident of the cosmos, that people should live as though death will render everything in their lives utterly redundant and that Christian celebratory holidays are cultural norms of the delusional. (Incidentally, it hardly seems unusual to me that a society with a Christian history has public holidays linked to this heritage. But hey, show some respect, Richard Dawkins is speaking).

I’m not convinced of Dawkins’ argument and never have been, although I’m no opponent of science (or of free thought either). I believe that science is an invaluable tool for the betterment of the human race, and I believe that it has delivered the foundational understanding for our modern lives. Medicine, engineering, communications, education: these and virtually every other aspect of human existence have been improved by scientific advances. But I also believe that science does not, indeed cannot, answer any and all questions about human existence. And if people wish to seek answers in religious belief and social structures based on religious principles, it is not Richard Dawkins’ place to tell them that they shouldn’t.

If you would like to submit a guest post to Bear Skin, please feel free to email me at jennifer@bishop.id.au