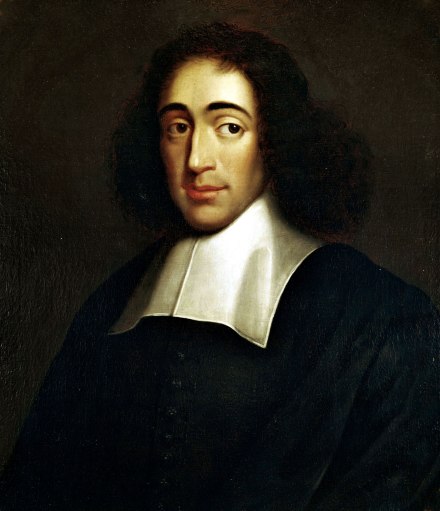 Baruch Spinoza, born Benedito de Espinosa, 24 November 1632 – 21 February 1677,  was a Jewish-Dutch philosopher of Portuguese Sephardi origin. His family moved to the Netherlands during the inquisition to escape persecution and he was raised in a Portuguese-Jewish community in Amsterdam. There he received a traditional Jewish education and developed highly controversial ideas regarding the authenticity of the Hebrew Bible, the nature of free will, good and evil and of the Divine. He was offered 1000 florins a year to conceal his doubts; when he refused, Jewish religious authorities issued a herem (חרם‬) against him, causing him to be effectively shunned by Jewish society at age 23.

Spinoza spent his remaining 21 years writing and studying as a private scholar. His books were also later put on the Catholic Church’s Index of Forbidden Books.

Spinoza lived an outwardly simple life as an optical lens grinder. His wants were few and simple, and he showed throughout his life a rare indifference to money, turning down rewards and honours, including prestigious teaching positions.

Spinoza’s magnum opus, the Ethics, was published posthumously in the year of his death. The work opposed Descartes’ philosophy of mind–body dualism, and earned Spinoza recognition as one of Western philosophy’s most important thinkers.

Spinoza wrote the … masterpiece, and one in which the refined conceptions of medieval philosophy are finally turned against themselves and destroyed entirely.

Medieval philosophy places heavy emphasis on the theological. One of the most heavily debated topics of the period was that of faith versus reason. Avicenna and Averroes both leaned more on the side of reason, whereas Augustine stated that he would never allow his philosophical investigations to go beyond the authority of God, stating first believe, and then second, seek to understand (fides quaerens intellectum). Anselm attempted to allow for both faith and reason.

Spinoza contended that everything that exists in Nature (i.e., everything in the Universe) is one Reality (substance) and there is only one set of rules governing the whole of the reality that surrounds us and of which we are part. Spinoza’s system also envisages a God that does not rule over the universe by Providence, by which it can and does make changes, but a God that is the deterministic system of which everything in nature is a part. Spinoza argues that

In writing such, he directly challenges a transcendental God that actively responds to events in the universe.  In his view, no amount of prayer or ritual will sway God. Spinoza influenced many later thinkers including Einstein  who named Spinoza as the philosopher who exerted the most influence on his world view. Einstein once wrote:

I believe in Spinoza’s God who reveals himself in the orderly harmony of what exists, not in a God who concerns himself with the fates and actions of human beings. 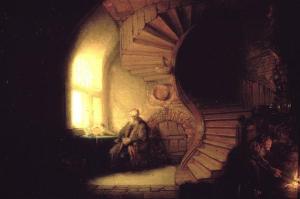 Interestingly, Spinoza did not argue that humans were primarily rational creatures. Since to Spinoza everything must necessarily happen the way that it does. Therefore, humans have no free will, despite strongly believing that they do. This illusionary perception of freedom stems from human consciousness, experience, and indifference to prior natural causes. Humans think they are free, but they ″dream with their eyes open″.

This picture of Spinoza’s determinism is illuminated by this famous quote in Ethics:

Spinoza held good and evil to be relative concepts, claiming that nothing is intrinsically good or bad except relative to a particularity. Things that had classically been seen as good or evil, Spinoza argued, were simply good or bad for humans.

Despite his alleged atheism, according to Spinoza, the highest virtue is the intellectual love or knowledge of God/Nature/Universe.

He also meditated on the transformative power of love over pure reason.

Hatred is increased by being reciprocated, and can on the other hand be destroyed by love. Hatred which is completely vanquished by love, passes into love; and love is thereupon greater, than if hatred had not
preceded it.

Besides the religious controversies, nobody really had much bad to say about Spinoza. Even those who were against him “had to admit he lived a saintly life”.  Spinoza died at the age of 44 in 1677 from a lung illness, perhaps tuberculosis or silicosis exacerbated by the inhalation of fine glass dust while grinding lenses. He is buried in the churchyard of the Christian Nieuwe Kerk in The Hague.

Along with René Descartes, Spinoza was a leading philosophical figure of the Dutch Golden Age. By laying the groundwork for the Enlightenment including modern conceptions of the self and the universe, he came to be considered one of the great rationalists of 17th-century philosophy.

His philosophical accomplishments and moral character prompted Gilles Deleuze to name him “the ‘prince’ of philosophers’.“