A set of  8 Claude Monet’s ‘Nympheas’ or ‘Water Lilies‘ murals are currently housed at the La Musee de l’Orangerie in Paris, a gallery which was designed in 1927, with large oval rooms particularly to display his works. Many more of the works are held in galleries around the world and are part of Monet’s largest and most famous series.

Monet painted ‘The Water Lilies‘ over a 30 year span, between 1899 to 1927 and number approximately 250 oil paintings in total. His method of painting the same scene many times grew from his desire to capture the changing of light and the passing of the seasons.

The wall murals at La Musee de l’Orangerie are so large that one should stand back several meters from the work to gain a full view and to allow the eyes to adjust to the taches of paint which up close cause the vision to blur.

The name of the era, Impressionism, is derived from the title of a Claude Monet’s early work, Impression, soleil levant (Impression, Sunrise) [below] which was exhibited in 1874 and which provoked the critic Louis Leroy to coin the term as part of a satirical review. He declared the work as nothing more than a sketch.  The Impressionists indeed faced harsh opposition from the conventional art community in France who at the time championed traditional and historical subjects, religious themes, and portraits. The Académie des Beaux-Arts, preferred carefully finished images that looked realistic when examined closely, with precise brush strokes carefully blended and with muted colours. 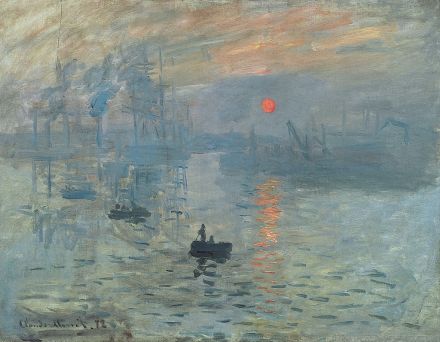 However, as art was becoming almost photographic the invention of photography challenged the role of the artist.  The development of Impressionism can be considered partly as a reaction by artists to the challenge presented by photography.

Photography encouraged painters to exploit aspects of the painting medium, like colour, which photography then lacked:

The Impressionists were the first to consciously offer a subjective alternative to the photograph.

It was painters such as Monet, Renoir, Sisley, and Bazille in the 1860s who ventured into the countryside together to paint in the open air, in sunlight, taking subjects direct from nature, and making bold use of the vivid synthetic pigments.

Photography inspired artists to pursue other means of creative expression, and rather than compete with photography to emulate reality, artists focused,

These artists showed that the more we see with the eye, the less we see with the heart. To them, art was never about producing a representation of reality but of carrying on a conversation with reality, through the lens of the eye via the heart and into a form which will then create an impression in another persons eye and body and heart.