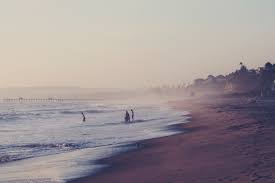 … stories have shapes … and … the shape of a given society’s stories is at least as interesting as the shape of its pots or spearheads.

Vonnegut is well known for his essays on the common tropes of stories and their meanings. Like a museum of cultural artefacts, popular and enduring narratives reveal much about a nation’s collective identity. 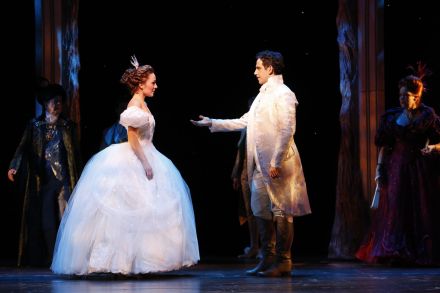 Vonnegut, for example, likens the Christian Biblical story to the Cinderella narrative, a narrative so popular it is repeated each generation in one form or another – Think Oliver Twist, Annie, Pretty Woman and so forth. The once impoverished protagonist is beloved of the prince and not only overcomes oppression and ignobility, but arises from the ashes to ascend into the heights of bliss as beloved and co-heir to the kingdom.

The Jewish scriptures on the other hand tell more a protracted tale of survival through suffering, wandering and woe, in the vein of Homer’s Odysseus. Hope and faith which endure through darkness is the theme of Jewish narrative and is perhaps best exampled in the short narrative of Job.

In the Book of Job, the mortal man beset with many ills, is faced with the realisation that humanity has one bitter end – death. This death is part of a catch-22 deal that has humanity cornered. ‘A man [sic] is born to mischief as the sparks fly up,’ [Job 5:7] and while he, Job, is as moral a man as has ever lived, no morality is moral enough to reach perfection. His friends urge penance and he rejects this claiming he has already lived a moral life and instead turns upon God with an audacious demand for an account to humanity. 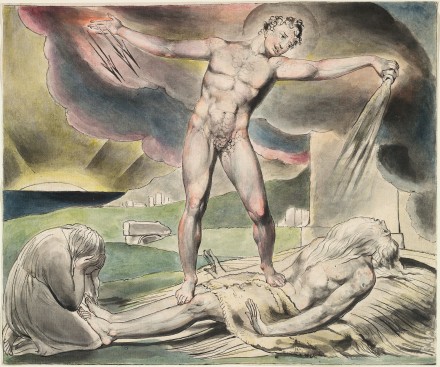 What a curious and unpious narrative to mark a nations identity?! How does it nuance our understanding of the greater canon of scripture?

Perhaps examining other popular and enduring stories will help us.

A ship lands on an alien shore and a young man, desperate to prove himself, is tasked with befriending the inhabitants and extracting their secrets. Enchanted by their way of life, he falls in love with a local girl and starts to distrust his masters. Discovering their man has gone native, they in turn resolve to destroy both him and the native population once and for all. Avatar or Pocahontas? As stories they’re almost identical.

John Yorke, Into The Woods

This narrative is a hero-quest and the protagonist crosses into the alien and unfamiliar world of their sworn enemies. Romeo and Juliet follows a similar trajectory. When Romeo enters his enemies house in disguise, he falls for their daughter. They pursue an elicit love affair that ends with an elopement, and while their love is doomed, the tragedy of these two lovers draws the warring families into peace talks. 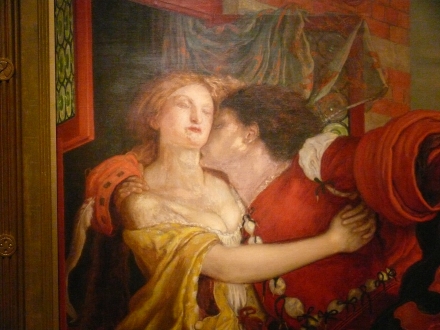 It is a powerful theme. Reconciliation is found when one learns to love ones enemies by living in their world and seeing the battle from their vantage point. Even if their quest may be doomed, this very action can bring an end to the conflict that has divided the two worlds.

This story of Job is so simple and so profound; it is the fulcrum of the greater narrative, the link between Jewish scriptures and the New Testament. Job, the mouthpiece of the Hebrew people, calls God to provide a personal account for the inevitable sufferings of humanity, and the New Testament supplies the response.

The New Testament recounts the arrival of the author of the story, into the story. This character, lands on the alien shore and befriends the inhabitants of this world. Here he  falls in love with them and taking up arms against the enemy forces, the enemy of death, the character perishes in his battle for their freedoms. While the story is tragic, despite his death,  he takes down the enemy – death itself – and so does what no man has done before, returns life to the ailing population.

Whether the Bible is a Cinderella story, a Pocahontas story, an Avatar story, or another hero-journey, it is clear that the repeated motifs of the popular stories we love and retell, resonate deeply with human identity and our search for meaning, destiny and purpose.

There is perhaps no more striking representation of the battle between good and evil than in Stranger Things, the Netflix series which released its second season in late October 2017. This battle is seen through the eyes of children in a normal town of Hawkins Indiana.

Set one year after the events of Season 1, it is Halloween October 1984, and we are treated once again to pop culture references of ’80s movies including Aliens, Ghost Busters, Strange Encounters of the Third Kind, Dungeons and Dragons and arcade games such as pac-man and space invaders. 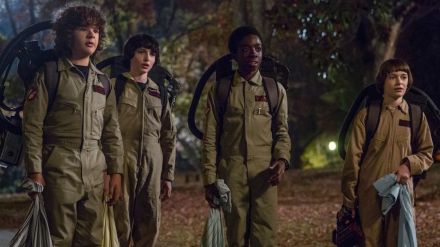 In the first season of ‘Stranger Things’, we met Eleven, a girl with telekinetic powers who has been caged and tormented in a research lab, and who opens the door way to ‘the upside down‘. This nightmarish world is a dark shadow of our own, a literal ‘upside down’ version of reality where dark things lurk and various innocents such as Will and Barb are drawn and even lost.

In Season 2, we see the characters each dealing with the after effects of their adventures in season 1. Will, still connected to the upside down, is seeing visions of the evil menace over Hawkins and he warns his friends. They believe he is simply experiencing post traumatic stress flashbacks however soon he becomes affected by the “shadow monster” as though possessed by a demonic power. 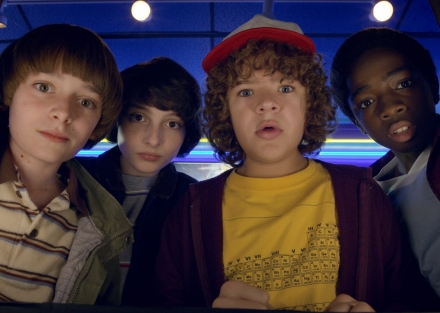 Can Eleven and the gang stop the forces of evil again before it consumes their friend Will, their town Hawkins and maybe their entire world?

As mentioned in earlier Bear Skin posts, many stories have a doorway metaphor allowing protagonists to pass into a magical or mythical world of adventure.  Indeed, classics such as “Alice in Wonderland” or ‘The Lion, the Witch and the Wardrobe’, contain a literal door through which children pass into a magical land. Here a a battle of good and evil occurs, or at least a discovery of true self and courage. Other classics such as “Harry Potter” tell of parallel worlds [the worlds of muggles and of Witchcraft and Wizardry] which live in close relationship. Only the few special characters are able to navigate both and it is there the true battles of life and death are fought and won.

This metaphor duality of our world, of scientific objectivity on the one hand and the world of narrative and myth on the other, represents the division between the conscious and the subconscious, the natural and the supernatural. These stories and the journey of protagonists between worlds, through the doorway or portal, takes the reader or viewer on a journey into their own dream-state, to do battle with the evil which lurks there. 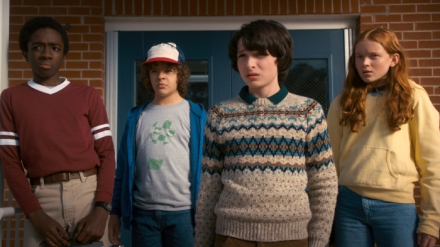 ‘Stranger Things’ and other doorway stories, shows how unexamined rationalism, or worlds without myth and legend, impoverish the mind and spirit. The ordinary world that denies the magical or mythical world does so to its own detriment. It seems that those who deny the chaos and disorder of the subconscious will eventually be ruled by it; 19th century humanist rationalism, ever optimistic about the greater and greater advancements of human knowledge, gave rise to the cruelty and chaotic destruction of the early 20th century regimes of Stalin, Hitler and Lenin.

And so what is the solution to our dilemma?

It is the hero who must bridge the two worlds, crossing between and doing battle with the forces or chaos within the subconscious. The hero-journey, so prevalent in narrative, myth and legend is the descent into the psyche as though into another world to encounter the monsters of chaos therein. The hero will face the beast he or she fears the most and there through acts of courage and often great sacrifice, vanquish them or contain them.

In returning, the hero can then seal up the fractured psyche, restoring the integrity of the soul. What magical force does this hero use? Well, the most powerful a mystical force available to humans – the force of love.