When Bastian hides in an attic to read a mysterious book, he discovers that this is no ordinary story……..the Neverending Story is a living book.

He finds himself a character within the story he was reading, Here, Bastian is handsome and bold, a boy equal in strength and courage to Atrayu. As saviour of Fantasia, he is granted AURYN, the gem of the Childlike Empress, inscribed with the words “Do As You Wish.”

Here, his imagination can create worlds. Everything he wishes, comes to pass.

Bastian is cautioned by the Childlike Empress to be aware that his wishes become realities, and these realities affect the fates of other Fantasians. Bastian can only govern Fantasia well when he considers deeply his desires and wishes only for what he truly wants.

However, as Bastian grows in confidence, he becomes less and less aware of the deep desires that motivate him, and less careful of the consequences of his wishes. With every wish Bastian loses a memory of his former life. Atrayu points out, that without memory, Bastian cannot have a true will and without a will, he will lose himself.

Without a will, he cannot wish himself home again.

Can Atrayu save Bastian from his descent into madness? Will Bastian become trapped in Fantasia forever? 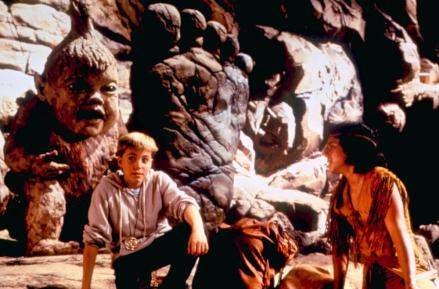 Ende achieves in the second part of the Neverending Story, new insights of the significance of dream and myth to human health and happiness. Just as travelling into our dreams and subconscious is necessary for human health, a journey required to understand our deep complexes and to do battle with our subconscious fears, so too the converse journey is critical – the return to conscious life.

It is in the conscious world, our external world, where human relationships occur that the deep desires of the human heart are realised. Here we love, are loved, face external challenges and grow.

A person lost in dream or myth, or a person at the mercy of their fantasies and desires, without touch with the real world, is someone who eventually loses touch with their core identity, their memory, their will, even their own name.

The maddened Bastian becomes so lost in his own fantasy that he needs a saviour, someone who can give him a name and restore enough will for him to remember his father and so desire to return home. Moreover, Bastian needs someone to remain in Fantasia to take responsibility for all the stories that his wishes have given life to.

Atrayu, despite being betrayed and wounded by Bastian steps in, reminds Bastian of his true name and in doing so restores him with enough will and memory to send him back to his conscious life.

It is Atrayu who remains in Fantasia to finish the story. And so Ende delivers the final note to his story. The true hero sacrifices himself so Bastian might have life.

Atrayu is not a product of Bastian’s imagination. He is the character who drew Bastian into Fantasia, he was betrayed and wounded by Bastian his friend, and now as Bastian surrenders AURYN, at his wits end, Atrayu restores Bastian’s ‘self’ and ability to return to a life of relationship and being.

One thought on “The Neverending Story: Part II”