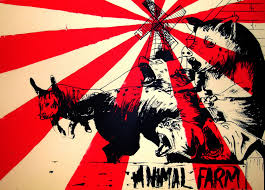 I have never fully understood the allegory of communism that George Orwell wrote in 1954. It seemed both childlike and conversely, overly pessimistic.

In the story, the farm animals led by two pigs, Napoleon and Snowball revolt against their human slave-masters and declare independence. Initial glory, success and freedom soon decays into bitter infighting, reconstructed ideals and a dictatorial leadership by lone pig Napoleon who behaves much like the humans he overthrew.

However, visiting a communist nation like Vietnam recently illuminated a few things to me about the contradictions the short novella highlights.

Despite being a socialist state, there is almost nothing in the way of social security in Vietnam  – elementary education incurs a fee, as does basic health care and retirement benefits are rare.

When the average monthly salary is only USD $150 per month the problems these expenses cause families on the lower end of the wage spectrum, are immense. Disability and illness, exacerbated by after effects of the war include, unexploded munitions, chemical poisons and genetic deformities.

While the people are industrious, gentle and hospitable and there is little begging or visible unrest, the country rests upon an ideology that is not clearly displayed in its social systems. The divide between the richest and poorest is immense.

It does seem that the unfortunate result of communist ideology is “some animals becoming more equal than others.”