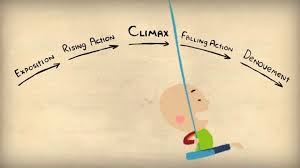 Paul Zak, professor of economics, psychology and management at Claremont Graduate University in California, is one the founding pioneers of neuroeconomics, an emerging scientific field that traces the biology of decision-making processes and the human brain’s reaction to incentives.

In this animated exploration of one of his most illuminating experiments, Zak discusses the surprisingly calculable effects that the classic dramatic arc (exposition/rising action/climax/falling action/denouement) has on our brain chemistry and, ultimately, on our decisions and actions.

Monitoring the brain activity of hundreds of study subjects watching a video with a simple narrative, Zak found increases in the levels of the neurochemicals oxytocin and cortisol, which are associated with empathic responses.

Most remarkable, however, was the discovery that this response also resulted in study subjects taking action, in this case through donating money they had just earned to a charitable cause related to the story they watched and even to fellow subjects.

Zak’s conclusion that there could be a universal story structure that functions to connect us to each other might not be surprising to storytellers, but seeing it supported by neuroscience is a tale worth repeating.

Empathy, Neurochemistry, and the Dramatic Arc originated as a speech by Zak at the inaugural Future of StoryTelling summit in New York in 2012.

You can see the original post at AEON here.