Any child of the 80’s should remember the Henson creation, “Fraggle Rock”. Muppet-like characters, the Fraggles inhabited caverns and tunnels underground. They occasionally surfaced to interact with the strange humans [Gorgs], but mostly they lived happy lives, oblivious of the wider world, carefree in “Fraggle Rock”.

The Fraggles ate a curious candy substance made by the Doozers, pictured below.

The relationship between Fraggles and Doozers was symbiotic – the Doozers would build their constructions out of the edible candy-like substance (manufactured from radishes), greatly enjoyed by Fraggles, and the Fraggles spent much of their time eating tasty Doozer buildings.

This pleased the Doozers, because not only was their work being enjoyed by someone, but if the Fraggles stopped eating them, the Doozers would eventually run out of building space. 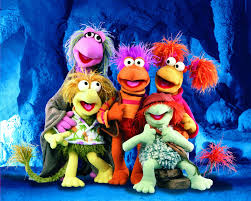 Imagine if all of us considered our work with the joy of the Doozers ? Instead of wishing to construct great towers to leave a legacy or name for themselves, the Doozers celebrated when the Fraggles decimated the buildings and ate the candy. This only created another opportunity for the Doozers to work and create new constructions which in turn would be eaten.

Maybe we can learn to create like a Doozer.

One thought on “The Doozers”