We all fall down.

It’s childish poetry has been recently associated with the tragedy of the Great Plague of the 1600s, or with earlier outbreaks of the Black Death in England from 1300s. Experts in nursery rhyme lore write:

The invariable sneezing and falling down in modern English versions have given would-be origin finders the opportunity to say that the rhyme dates back to the Great Plague. A rosy rash, they allege, was a symptom of the plague, and posies of herbs were carried as protection and to ward off the smell of the disease. Sneezing or coughing was a final fatal symptom, and “all fall down” was exactly what happened.

However, other folklore scholars regard the theory as baseless for several reasons: 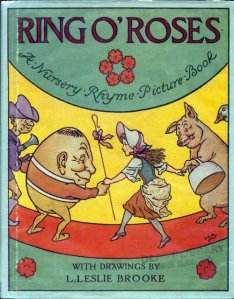 in the religious ban on dancing among many Protestants in the nineteenth century, in Britain as well as here in North America. Adolescents found a way around the dancing ban with what was called in the United States the ‘play-party.’ Play-parties consisted of ring games which differed from square dances only in their name and their lack of musical accompaniment. They were hugely popular, and younger children got into the act, too.

In fact, many nursery rhymes have political or historical contexts quite different to the innocent childish games they are today. Some in fact are quite sinister. You can read more about The Dark Origins of 11 Classic Nursery Rhymes here.

Ruth Park, Australian author of the children’s class Playing Beatie Bow, picked up this tendency of children’s games to hark back to dark history, weaving the motif into her children’s novel.

First published in 1980, Playing Beatie Bow tells of 14 year old Abigail who is drawn into a curious children’s game named “Beatie Bow.” The chidlren believe they are summoning the ghost of Beatie Bow, who died a hundred years prior.

Little does Abigail know but the game has opened a door way in time and the real Beatie Bow is lured through time from 1873 colonial Sydney town, summoned by the children chanting her name. Abigail pursues the girl back through her doorway in time and becomes stranded in 1873, living with the Bow family and their subsistence life in the Rocks of Sydney harbour.

The family believe she bears a “gift” for future generations of the Bow family. The novel is a lovely retrospective on colonial Australia, adolescent love and growing up. The narrative is tied together with the motif of a playground game which stitches generations together across time.