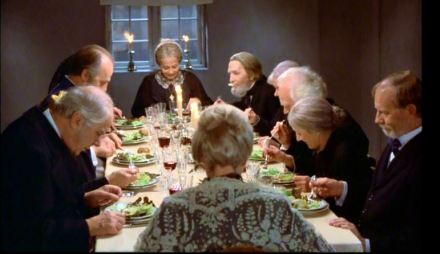 “An artist is never poor.”

Babbette’s Feast is a short story written by Isak Dinesen, the author of “Out of Africa.” Otherwise known as Karen Blixen, the Danish  author was a contemporary of and admired by many modernist greats including  Hemingway, e e cummings, Truman Capote and others.

Upon receiving the Nobel Prize for Literature in 1954, Hemingway declared the prize really belonged to Isak Dinesen.

‘Babette’s Feast’ recounts how a fugitive of the bloodshed and revolution in late 18th century France arrives in a small and humble religious community in Denmark, seeking asylum. Unmarried sisters Martine and Phillipa, daughters of the elderly minister, are unable to pay the woman but accept her as their cook. The woman Babette, cooks faithfully for them for 15 years, serving the simple fare their religious community allows.

Every year her friend in Paris enters Babette into the lottery and one day, when she wins 10, 000 francs her sole request is to cook a delicious meal for the small community in celebration of the minister’s 100th birthday.

Babette determines to cook a ‘real French dinner’ and begins to order the ingredients through merchants. As the unheard of fare begins arriving in the village, Martine and Phillipa discuss whether the feast will become a sin of sensual luxury to their small religious community. In compromise, the sisters and congregation agree to eat the meal but to never discuss their pleasure nor mention the food during the meal.

Although the attendees of the meal refuse to comment on the earthly pleasures of it, Babette’s gifts breaks down their distrust and superstitions, elevating them physically and spiritually. Old wrongs are forgotten between villagers, ancient loves are rekindled, and a mystical redemption of the human spirit settles in the community.

Once the meal is completed, Babette reveals that she once was the chef of Cafe Anglais in Paris and at this restaurant, a dinner for 12 people cost 10, 000 francs. Despite her winnings she is now still penniless.

“Now you will be poor the rest of your life”,

“An artist is never poor.”

I wonder how many artists see their work as a gift to the world – a source of restoration to a community rent by distrust and superstition, a means of elevating them physically and spiritually, a source of love and mystical redemption?