This week at Queensland Galley of Modern Art, is the last week to see the David Lynch exhibition, closing June 8th. Our guest blogger in residence Damien Shalley writes this article to pay homage to the great artist and film director. He prefaces his work in regular form:

Damien Shalley once made a magistrate say “Good grief!” nine times during a hearing.  He remains completely unrepentant. He won’t sign your contract unless he’s read it or someone has given him the general “vibe” of it. He’s trying to sell a manuscript for a horror novel called “Trans Am Man” about the ghost of an evil mechanic who returns from the grave to give your sports car an underwhelming tune-up. He currently has no takers. He believes that “The King of Siam…sent a telegram…and it said Wop bop a loola baby wop boom bam!

If you have an article or submission to offer to Bear Skin, please don’t hesitate to contact me at jennifer@bearskin.org.

Velvet Nightmares – David Lynch and the Nature of Existence

Many moons ago, when the polar ice was thicker and Whitney sang about the children being our future like she had just realised this, there was an obscure cartoon strip called “The Angriest Dog in the World.“  It was created by one David Lynch, before he became the “David Lynch.”  It ran in various alternative press newspapers like the L.A. Reader between 1983 and 1990.  (Your correspondent first read about it in an esteemed yet controversial monthly periodical which cannot be named in Bear Skin).  It was an unusual strip in that the art never changed, only the captions.  The angry dog could always be found straining on his leash and exhibiting hostility toward the world.  The captions were cryptic but often insightful.  “In this world, there seem to be several different theories which differ from one another to a considerable extent,” is one such observance. 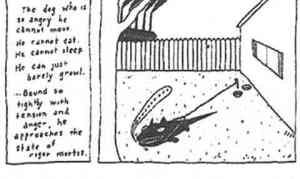 Lynch introduced readers to his constrained, alligator-like canine as “The dog who is so angry he cannot move.  He cannot eat. He cannot sleep.  He can just barely growl.”  But the angriest dog ever still managed to make more than a few relevant points about the nature of existence.  The strip could easily be dismissed as immature nonsense, but it did manage to find favour with an audience whose eyes were open to the absurdities and injustices of life.  One particular strip featuring the angry dog in quiet darkness at the end of another incarcerated day is very insightful.  The restricted animal– “bound so tightly with tension and anger, he approaches a state of rigor mortis” – has nothing to look forward to but quiet darkness and the end of another pointless day. “It doesn’t get any better than this,” his unseen owner comments from inside the house as the dog seethes about his predicament in the blackness.  How many of us feel (or have felt) similarly hopeless and hostile?  Our chains are invisible – work, family, mortgages – but how many of us can relate absolutely to the despair that is embodied perfectly in these simple panels.  Bound and ineffectual, inescapably retrained by our circumstances, we strive to obtain more from our existences.  This is the wonderful, insightful power of the “Angriest Dog…”  It makes us feel something – a basic truth about ourselves and our lives.  And this demonstrates just how perceptive David Lynch is.  Bizarrely, weirdly perceptive.  But great.

Lynch, of course, went on to become a famous (if somewhat off-kilter) director of film and television, as well as continuing his long-standing career as a visual artist.  (His “Between Two Worlds” exhibit is currently showing in Brisbane at the South Bank Gallery of Modern Art until the 8th of June, 2015).  According to the Gallery of Modern Art website, found here , this exhibition depicts “…representations of inner conflict; and the possibility of finding a deeper reality in our experience of the everyday”.  It is primarily an exhibition of surrealist art in various forms; painting, sculpture, photography, film, installation s (including some lounge decor suspiciously similar that found in the Twin Peaks “Black Lodge”), but GoMA’s description seems a valid one.  Lynch has always attempted to do this – explore reality from a different perspective and find a deeper meaning.  He just hasn’t necessarily done it in a manner that audiences can readily understand.  Lynch’s work nudges viewers into finding the real truth behind it, or perhaps simply finding their own personal truth whilst looking.  This is what life is all about.  See his exhibit while you can. 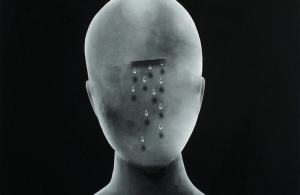 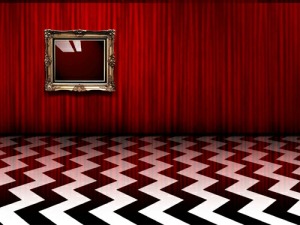 Lynch is now, most well-known as a director.  The controversial and bizarre “Blue Velvet” (1986) remains a standout of his filmography.  Despite depicting terrible violence and the sordid, awful, crawling underbelly of a picturesque American town with dark secrets, the artful film is also gripping and compelling.  His casting of the beautiful Isabella Rosselini  (playing “Dorothy”) as the muse of the crazed Dennis Hopper(“Frank Booth”) doesn’t hurt either. 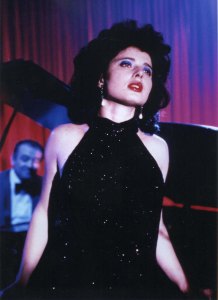 His cult television series “Twin Peaks” continues to beguile fans of the fictional Laura Palmer, whilst offering an insight into what lies beneath the surface of what we know as “Americana” – cherry pie, prom queens and “respectable” citizens.  His notorious adaptation of Frank Herbert’s novel “Dune” (1984) depicts in outlandish fashion an “infestation” of corruption beneath the surface of a ruling elite, whilst his 1980 film “The Elephant Man” – the story of the deeply unfortunate, terribly disfigured and publicly hooded Joseph Merrick – is another story about “what lies beneath”.  This particular theme – what really underlies the orderly surface of our daily existence –occurs so often in Lynch’s work that one might well ask what motivates it.  The answer might not be what you’d expect. 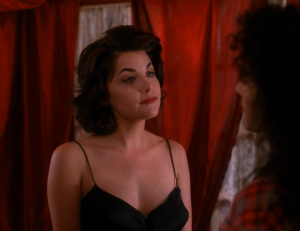 To some observers – despite Lynch’s successful commercial film and television career – it seemed that he took along with him whatever anxieties and anger he felt at that time of “The Angriest Dog…”  As he journeyed toward fame and creative accomplishment, he stayed very “strange”.  His personal life was messy and his creative choices were often bizarre.  An almost existential fear of relationships seemed to permeate his work.  Despair at the falseness of many human interactions, fear of betrayal, abject confusion about female sexuality and complete horror at the exploitation of innocence (and the consequences which stem from it) were hallmarks of his oeuvre. Why?

Certain commentators have suggested mental damage or complete madness.  In their February 1991 issue, a US publication famous for featuring female beauty (which also contains excellent articles but which must remain unidentified here) profiled Lynch in exquisite detail and consulted a psychological professional to examine the imagery in some of his films.  The consultant was particularly alarmed by Lynch’s black and white feature “Eraserhead“ (1977), which he considered to contain visuals consistent with what could be expected from the victim of abuse.  (This remains totally speculative and completely unfounded – histories of Lynch’s childhood appear to reveal nothing but normalcy and a middle-class upbringing in a loving and supportive family).  “Eraserhead” is a bizarre film, featuring a mewling, deformed infant which some have likened to a skinned goat, and characters who talk to each other but never really communicate.  It has sometimes been described as a Freudian (or Lynchian) depiction of the fear of fatherhood.  Many men admit to such fears.  A man can love a thousand women for the amount of effort it takes to love one and raise a child with her.  And with a totally and permanently dependent child such as depicted in Lynch’s films, not only does a man’s freedom evaporate but also his financial resources.  Is there really anything so strange about what Lynch presented in “Eraserhead”, or did he simply depict onscreen (in a somewhat disconcerting manner) what men already know instinctively?  Watch the film and decide for yourself.

Intelligent people turn to experts for answers – trained professionals who have spent their valuable time becoming highly knowledgeable in specialist subject areas.  Medicine, archaeology, physics, astronomy and a multitude of other professional and academic disciplines all offer important insights into our existence and can potentially open new realms of understanding.  This is a good thing.  Human societies benefit exponentially when their structures are based on truth.  But here’s the difficult part.  Some people can’t ever understand or assimilate this knowledge, no matter how hard they try.  They’re just not equipped to do so (your humble correspondent is one of them – “A Brief History of Time” by Stephen Hawking might as well be written in Chinese).  Individual intelligence capacity varies, and some people aren’t even remotely interested in exploring this type of knowledge anyway.  They have other priorities – work, family, mortgages – as previously mentioned.  They just want to live – live as a part of the world and not change it.  Intimate knowledge of the space-time continuum or how to modify the human genome to eliminate “imperfections” just doesn’t hold much interest for them.  They have questions, but they don’t turn to science for comfort.  They turn to their culture. They turn to stories and popular art – movies, television, music and more. And this is why art is so important – and where David Lynch fits in.

In a world with questions, many of which aren’t answered (or can’t be answered), a world which doesn’t do much to promote a broad understanding of the scientific answers we do have, art is important.  And an artist like David Lynch is very important.  He’s not just a maladjusted individual with some wealthy corporate patrons who gets to make movies for a living whilst you struggle to pay the bills.  He is the conduit through which people who are experiencing a particular feeling or asking a particular question about life can connect with someone else who has felt the same way and who has offered up a part of his own human experience for other people to share.  You might not “get” Stephen Hawking intellectually, but you’ll definitely “feel” the power of the art of David Lynch. 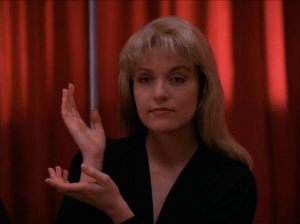 And it’s not all doom and gloom in the Lynchian universe.  He is a stylish filmmaker with an eye for beautiful composition.  His villains are evil and abusive, yet also somehow compelling.  (The awful, real-life murderer Robert Blake of “Baretta” fame featured scarily and presciently in Lynch’s excellent “Lost Highway“ prior to his legal troubles and he’s impossible to turn away from).  Lynch’s ingénues are beautiful, elegantly coiffed and mysterious – with peaches and cream complexions and a seductive (yet often deceptive) wholesomeness.  He regularly contrasts the innate elegance of female beauty with the awful reality of forgotten American towns, almost like flower petals falling to cold earth at night and shrivelling before sunrise   Critics often rail at his subject matter and excesses (Wild at Heart is regularly criticised for violent content and this is probably quite valid), but they rarely criticise his work as being ugly to look at.  What any of it really means is ultimately in the eye of the beholder, but it’s all technically accomplished and mostly quite beautiful.  The violence in his work is ugly, but violence always is.  David Lynch is an authentic auteur – an artist with something to say who does so on his own terms for the benefit of all.  There are worse things you could do with your time than explore his intriguing works.