An earlier post, Pied Beauty,  touched on the sensory experience of language. Good writing lies in the authors’ ability to make the reader see, hear, taste, touch and feel. Unlike logic and rhetoric, the power of story is in its ability to make us feel, and so, to remember.

One such writer who has a genius for making the reader feel, is Hemingway.

Ernest Hemingaway was born 1899 and was second of six children of a Chicago Doctor, Clarence and musician, Grace.  In his youth, he excelled at English and sports and spent his summers swimming and hunting with his father. He was a journalist before a writer, and  left school to work as a reporter for the Kansas City Star. The paper’s style guide informed much of his later style,

use short sentences … use vigorous English. Be positive.

He worked only six months before volunteering for the Red Cross to become an ambulance driver in Italy. He left New York in May 1918 and by June was at the Italian Front.

His experiences are recorded in several of his works. In Death in the Afternoon [1932] he recounts searching through rubble in Milan for fragments of bodies. His wounding by mortar fire and susbsequent convalescence in a hospital in Milan is recounted in his semi-autobioraphical novel Farewell to Arms [1929].

The young Hemingway fell in love with American nurse Agnes von Kurowsky. In his novel, the young solider and nurse, escape Italy to Switzerland overland and by boat where she dies in childbirth. However in reality, Hemmingway was discharged and returned to the USA in January 1919, intending to marry Agnes. By March she broke his heart by writing to him that she was to be married to an Italian officer. 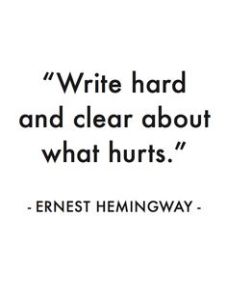 Back in the USA, Hemmingway worked again as a reporter and editor but he was restless. He met and fell in love with Hadley Richardson, the sister of a friend and they married in 1921.  Two months later he accepted a role as foreign correspondent for the Toronto Star and the pair sailed for Paris.

Post-war Paris was a cheap place to live, the American dollar being strong. There Hemmingway fell among a gathering of  “the most interesting people in the world”. Writers, artists and thinkers gathered in Paris to enjoy a golden age of intellectual and cultural fervour. Here Hemingway wrote some fiction and poetry while working as a reporter for the Toronto Star. He covered contienental politics and completed some travel pieces. 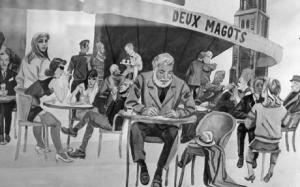 The group of modernist artists and writers among whom Hemingway found solace in Paris is recorded in A Sun Also Rises [1926] his first novel.  These included Gertrude Stein, Pablo Picasso, James Joyce, Ezra Pound and F Scott Fitzgerald among others others. In the novel he captured the feeling among his peers of the post-war “lost generation” but he qualified that he felt his generation was “battered but not lost.”

Disciple of the modernist set, particularly Gertrude Stein, Hemingway developed a minimalist style which delivered maximum sensory experience in a lean, pared back sentence style. So famed is he for this economy of style, that there now exists a Hemingway App which promises to

make your writing bold and clear.

Hemingway’s writing is peppered with his love for drink and for women and for food. His work is a sensory feast. As his words amble, so do his feelings – the way a drink makes him feel, the meal he eats as he waits for his son to be born, the feeling for a woman he cannot have, his disgust for his compatriots behaviour, the weather, the feeling of the weight of a fishing line, the methodical rthyms of a day, the passions a man gives to his work.

Between trips to Paris, Spain and Africa where he love game hunting, Hemingway published Farewell to Arms [1929], Death in the Afternoon [1932], The Green Hills of Africa [1935], To Have and To Have Not [1937] and other short stories.  For Whom the Bell Tolls [1940] was written during World War II and between 1942-1945 Hemmingway took a break from writing to act as foreign correspondent in Europe. After this time Hemingway began to struggle both in health and heart as his literary friends began to die one by one. In the 1950s, now with his fourth wife, he began The Old Man and the Sea [1952] . Of this he said, it was,

the best I can write ever of all of my life.

It won him the Pulitzer Prize in 1952.  In 1954 he suffered a series of accidents while in Africa and newspapers prematurely published obituaries of him. After these injuries caused him much pain and his heavy drinking turned into alchoholism. 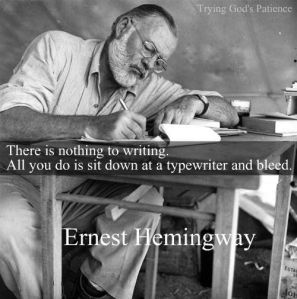 In October 1954, he was awarded the Nobel Prize in literature, a prize he is reputed for declaring belonged to Isak Dinesen and other writers. His health deteriorated greatly from here.

In 1956 he traveled to Europe and discovered a trunk of notebooks in the Ritz which had been left there from his Paris days. Excitedly he began the memoir of the time,  A Moveable Feast [1964], and completed Garden of Eden [1986] and Islands in the Stream [1970]. By 1959 he had slid into a depression from which he did not recover.

In the morning of July 2, 1961, shortly before his 62nd birthday, Hemingway shot himself with his favourite gun. A heavy drinker he likely also suffered from a genetic condition causing an inability for the body to metabolise iron, resulting in physical and mental deterioration.

Hemmingways’ writing is poetry. Poetry to life and all the senses. His existence in the early 20th century was something magical and something lost; free from social constraints life was filtered through the senses, fully experienced without judgement. His drinking and poor health perhaps took the better of him, or perhaps his sensitive heart could take no more of life.

Nevertheless, his life is an essay to his philosophy of being. A song to his generation, who had jettisoned the certainty and moralism of the 19th century and lived adrift and alive, experiencing the shocks of wars, of loves and losses. What a piognant full stop to his life is his suicide and death. Hemingway seemed to not care about the end, only the living.

Subsequent generations have moved beyond modernism into post-modernism and we currently experience an awakening of spirituality in arts and culture. Thoughts again are given to death as well as to life, to morality beyond immediate sensory experience.

4 thoughts on “Thank you Ernest Hemingway!”