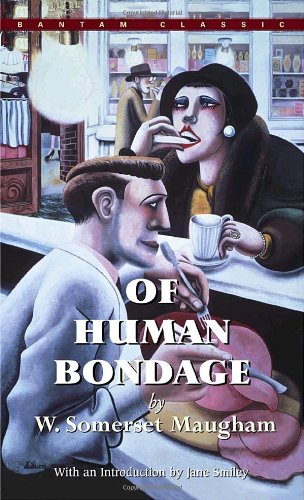 The semi-autobiographical novel “Of Human Bondage” by Somerset Maugham, tells the story of Phillip Carey, an orphan raised by his conservative aunt and uncle, who escapes to Europe, trains as an artist before returning to London to qualify as a doctor. In his journeys, he explores the continent, art, life, love and freedom. And he finds it a bondage.

Particularly Phillip’s love for waitress Mildred is a poignant illustration of the bondage of this freedom. She does not reciprocate his feelings, leaving him several times for other lovers. Maugham’s title  ‘human bondage’, is borrowed from the title of Spinoza’s Part IV of Ethics, “Of Human Bondage” or the Strength of the Emotions. Spinoza lists peoples inability to control their emotions as a bondage.

For Phillip Carey, peace is found when he settles down as a respectable Doctor to marry the daughter of a shopkeeper friend. He learns that “the simplest pattern, that in which a man was born, worked, married, had children, and died, was likewise the most perfect.” His submission to normalcy, or the conventional ‘bondage’ of society is in fact the freedom he seeks from the tyranny of his own emotions.

This notion reminds me of Soren Kierkegaard’s 1844 treatise, The Fear of Dread, or the Fear of Anxiety. Here Kierkegaard explores the dual fear of vertigo and desire to jump; anxiety and dread arises from the freedom to choose. The terrifying possibilities create “dizziness of freedom.”

Maugham exposes the catch-22 of the modern dilemma of freedom – all the time one is truly free, there exist a multitude of choices assaulting us, engaging our emotions. For Phillip Carey, peace is found by removing himself from this anxiety of freedom by surrender to the confines of a domestic existence, a profession, a wife and family. Here he cannot be kept in bondage by his feelings of love, loss, the anxiety of choosing.  It’s a modern dilemma but also a timeless dilemma played out in literature from the tragedy of Adam and Eve, through to contemporary poets and philosophers. Can we be truly free?